Binod Chaudhary is the only Forbes billionaire from the Himalayan nation

Binod Chaudhary began his entrepreneurial journey with a nightclub called Copper Floor in Kathmandu, Nepal. Today, at 60, he is Nepal’s richest man and the only Forbesbillionaire from the Himalayan nation, with a net worth of $1.14 billion (as of April 4, 2016). His CG Corp and innovation have interests in beer, electronics, hotels and even a controlling stake in Nepal’s Nabil Bank.

But perhaps Chaudhary’s best known enterprise is his brand of instant noodles: Wai Wai. His business path has seen him traverse the labyrinthian power structures that have existed in Nepal, both under the monarchy and in subsequent civilian governments. Controversies, therefore, have never been far behind.

In an exclusive interview with Forbes India, Chaudhary talks about his roller-coaster ride as well as his forthcoming autobiography, Making it Big by Binod Chaudhary, to be published by Penguin Random House India. Excerpts:

Q: The book mentions how, in your early years, you ran a nightclub, had long hair and rode bikes. Do you have trouble associating yourself to that today?

Not at all. I take great pleasure in having done what I did back then. I think every young person aspires to go through that phase. But when I look back and see the way I conducted myself then, it gives me a sense of satisfaction because even then, I was responsible and running a profitable business. My fundamentals were very clear. Even in things that I aspired to do, I was still trying to do it right. Just as I was, when I was 10 years old and running a tuck-shop in my school. I made that business profitable too!

Q: An important point in the journey seems to be the realisation that you needed to find someone within the Royal family if you were to continue growing your business.

In Nepal at that time, there was a controlled regime. Many of the members of the Royal family were involved in businesses. They would support people with whom their interests aligned. So I had no choice, but to find an ally. My good friend, the late Prince Dhirendra told me: ‘Look, they won’t let you survive. They’ll be after your life’. He wasn’t being greedy. In order to protect me, he offered a majority stake in a business that I would run with him as a partner. He even signed a paper that confirmed that the money I was investing for his share was a loan. So there were also good souls in the Royal family.

Q: Wai Wai is perhaps the most recognisable part of your group. Back when you began producing it, was it only a question of optimising the use of flour from your flour mills?

Yes, back then I was simply looking to create a product from flour and then I decided on this product. Flying to Bangkok and back, I saw many cases of noodles on the baggage belt and I would ask people: ‘Why are there so many of these cases coming from Thailand?’ They would tell me that people loved them. I think people have grown with the product. To begin with, Wai Wai wasn’t easily available in India. Today we have 20 percent market share in India. Now we’re looking at creating a large national campaign here. We do localised marketing, but this is going to be a big one.

How has the Nepalese economy evolved over the years and has it reached a point where it can enable more people to succeed?

The mindset of the regulators and people has opened up. When I opened the first office abroad in Singapore in 1990, it was around the time when the Maoist problem had started. But that wasn’t the only reason. I also had this inner desire that we need to grow. Why can’t we also build multinationals? Why do we have to be the country where multinational companies come? Why not the other way round? The situation then was unthinkable from a Nepalese perspective, in terms of the laws, the rules and regulations. There were no laws to even define specifically what a non-resident Nepali was. Often when I talk to students, I tell them that sometimes entrepreneurial initiatives of the sort that I undertook can also be termed as madness. If I was cautious and thought too much about the implications, I don’t think I would’ve been able to achieve what I did.

How The Rich Invest: Shesh Ghale and the stroll that saved him millions

Nepal-born Financial Review Rich Lister Shesh Ghale enjoys an evening stroll past his properties in the Melbourne CBD. Last June he and wife Jamuna Gurung took one that is set to promote them to billionaire status on this year's list, and ensure they stay there.

The two were passing the former Mazda dealership near Queen Victoria Market, where they had approval to build twin apartment towers, when they had their epiphany.

"We looked at the site, then we looked at each other, and started questioning whether we were doing the right thing here," Ghale, who with his wife of 36 years was valued at $876 million in the 2018 Rich List, tells the Financial Review. 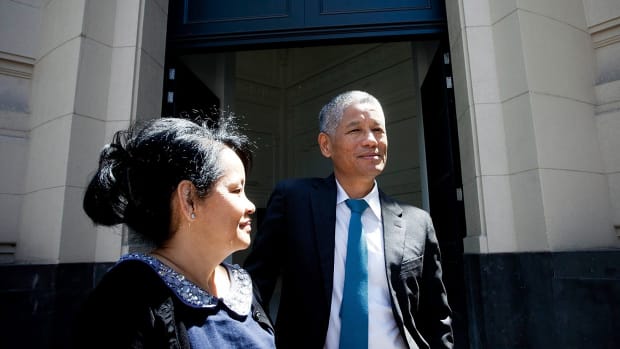 The planned development is just two blocks from the Latrobe Street campus of Melbourne Institute of Technology, the private college the couple founded in 1996 and built their fortune on, and Ghale had no doubt the towers would find some tenants among the international students that comprise 80 per cent of its clientele.

However, as the size of the development sank in as he stood before it, he worried it faced too much competition in a Melbourne apartment market that was already showing signs of cooling.

"We called our project management team the next day, and said we have to develop this as premium office instead," he says.

The couple's walking whim has proved fortuitous. Melbourne apartment market values fell as much as 20 per cent upon settlement in 2018, and are expected to decline further as a flood of supply hits credit-constrained demand.

The 4000-square-metre site on William Street is now proposed to house 20,000 square metres of A-grade office space, at a time where Melbourne commercial vacancies are around 10-year lows. Shops and a five-star hotel with 290 keys also feature, with completion targeted for 2022.

There is the small matter that Victoria's Department of Environment, Land, Water and Planning is yet to approve the change of use from residential to office. However Ghale is proceeding on the basis that it will, given the shape of the building will not change from the design the department previously okayed after amendments were made to avoid overshadowing of the Flagstaff Gardens opposite. 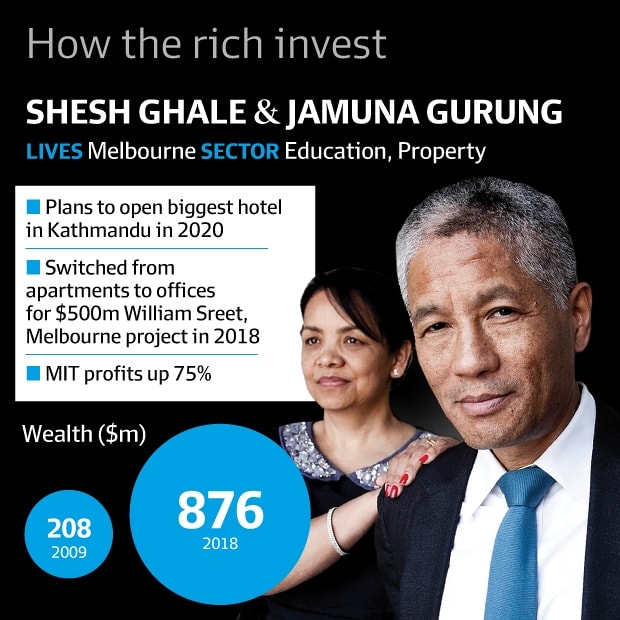 "We are just in-filling between the towers for the bigger floor plates required by offices, so we're working in anticipation of approval," he says. Colliers and Jones Lang LaSalle have been engaged to attract pre-commitment tenants.

With an end-value he estimates at $500 million, the William Street development is the largest Ghale and Gurung are undertaking — but two smaller ones arguably are more ambitious.

One is the redevelopment of the Sir Charles Hotham Hotel at the corner of Spencer and Flinders Streets, now a backpacker hostel that Ghale admits is "crumbling", into a boutique four-star hotel with 150 keys.

Inspired by his transformation of the former Argus newspaper's building into MIT's campus in 2014, Ghale says he is working to preserve as much of the 1854 building's "beautiful facade" as possible.

"It's a costly, difficult exercise but I like that. Like the Argus, we'll bring it back to its former glory," he says.

The couple are also giving back to their native Nepal, fully funding a five-star, 225-key Sheraton hotel in Kathmandu that Ghale proudly notes will host the country's biggest ballroom.

Ten years and $50 million have been dedicated to the project, which suffered a setback in 2015 when its foundations were damaged by the massive earthquake that killed almost 9000 people.

"It's a challenge on many fronts. Basically everything except a few local bricks has to be imported via India, but at the end we will have a hotel at the best location in Kathmandu, like being on Collins Street," he says.

Because of Nepal's lower labour costs, the hotel will have cost only a fraction of an equivalent Melbourne asset when it opens late next year, Ghale says. He estimates an end value of $125 million for 6600-square-metre site.

Ghale and Gurung are in a strong cash-flow position to pursue their property dreams. Their Ghale Group, which includes MIT and their real estate holdings, turned over $66.3 million in the year to June 30, 2018, up from $52.4 million the year before, with net profit of $16.1 million and net assets of $202.7 million.

MIT alone contributed $13.7 million profit, up 75 per cent on the prior corresponding period.

Ghale says growth in student numbers across its two campuses in Sydney and Melbourne have had to be capped at 15 per cent a year. Demand is surging for courses in data science, artificial intelligence and cybersecurity that MIT runs in partnership with the Computer Society and Engineers Australia, he says.

"The toughest thing is finding the senior people to teach these courses," he says.

"There's a lot more competition from the universities in these areas now compared to when we started, but we find our specialisation and our campus locations in the middle of the cities serve us well."